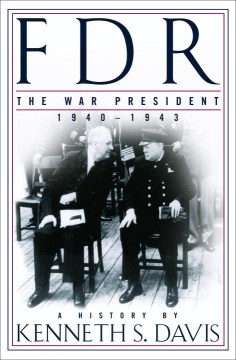 Random House, Inc.
FDR: The War President opens as Roosevelt has been re-elected to a third term and the United States is drifting toward a war that has already engulfed Europe. Roosevelt, as commander in chief, statesman, and politician, must navigate a delicate balance between helping those in Europe--while remaining mindful of the forces of isolation both in the Congress and the country--and protecting the gains of the New Deal, upon which he has spent so much of his prestige and power.

The portrait of Henry Hopkins, who interacted with many of these personalities on behalf of Roosevelt, is woven into this history as the complex, interconnected relationship it was. Hopkins burnished the relationship between Churchill and Roosevelt and eased the way for their interactions with Stalin.

Integral to this history as well are the Argentina Conference, the Atlantic Charter and the beginnings of the United Nations, the Moscow Conference, lend-lease, the story of the building of the atomic bomb, Hitler's Final Solution and how Roosevelt and the State Department reacted to it, Pearl Harbor and war with Japan, the planning of Torch, and the murder of Admiral Darlan. All these stories intersect with the economic and social problems facing Roosevelt at home as the United States mobilizes for war.

Kenneth Davis had the rare gift of writing history that reads with the immediacy of a novel; and though the outcome of this history is well known, the events and people depicted here keep the reader focused on an enthralling suspense story.

Baker & Taylor
Revisits the war years from the creation of the Grand Alliance and Pearl Harbor to the key battles of the war and the birth of the United Nations.

Baker
& Taylor
The final volume of this monumental FDR biography revisits the war years, from the creation of the Grand Allience and Pearl Harbour to the key battles of the war and the birth of the United Nations. 10,000 first printing.

Try searching for FDR, the War President, 1940-1943 to see if BPL owns related versions of the work.