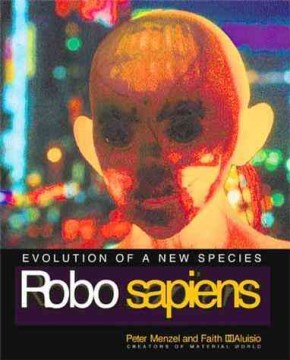 Evolution of A New Species

MIT Press
A field guide to our mechanical future, presenting the next generation of intelligent robots and their makers.

A field guide to our mechanical future, presenting the next generation of intelligent robots and their makers.

Around the world, scientists and engineers are participating in a high-stakes race to build the first intelligent robot. Many robots already exist—automobile factories are full of them. But the new generation of robots will be something else: smart machines that act like living creatures. When they are brought into existence, science fiction will have become fact.

What will happen then? With our prosthetic limbs, titanium hips, and artificial eyes, we are already beginning to resemble our machines. Equally important, our machines are beginning to resemble us. Robots already walk, talk, and dance; they can react to our facial expressions and obey verbal commands. When they take the next step and become fully autonomous, what will they do? Will we be partners or rivals? Could we meld into a single species—Robo sapiens?

In Robo sapiens, Peter Menzel and Faith D'Aluisio present the next generation of intelligent robots and their makers. Accompanying brilliant photographs of more than one hundred robots is an account of the little-known, yet vitally important scientific competition to build an autonomous robot. Containing extensive interviews with robotics pioneers, anecdotal "field notes" with behind-the-scenes information, and easy-to-understand technical data about the machines, Robo sapiens is a field guide to our mechanical future.

Baker
& Taylor
Profiles the newest generation of lifelike robots while making predictions that the human and robot races are merging, providing photographs of more than one hundred robots and chronicling the competition to build an autonomous robot.

Try searching for Robo Sapiens to see if BPL owns related versions of the work.