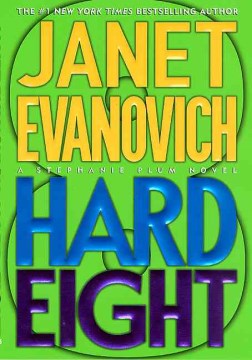 Baker & Taylor
When Stephanie Plum is hired to find a missing child, she begins to wonder if she is working on the right side of the law when events turn suspicious.

McMillan Palgrave
The #1 bestselling phenomenon continues in the eighth Stephanie Plum novel. The stakes get higher, the crimes get nastier, the chases get faster, and the men get hotter.

This time Stephanie, Morelli, Ranger. Lula, Valerie, and Grandma Mazur are strapped in for the ride of their lives. Stephanie is hired to find a missing child. But things aren't always as they seem and Stephanie must determine if she's working for the right side of the law. Plus, there's the Morelli question: can a Jersey girl keep her head on straight when more than just bullets are aimed for her heart? And with the Plum and Morelli relationship looking rocky, is it time for Ranger to move in for the kill? Janet Evanovich's latest thriller proves that Hard Eight will never be enough.

Blackwell North Amer
Fugitive Apprehension Agent Stephanie Plum has a big problem on her hands: Seven-year-old Annie Soder and her mother, Evelyn, have disappeared. Evelyn's estranged husband, Steven, a shady owner of a seedy bar, is not at all happy. During the divorce proceedings, he and Evelyn had signed a child custody bond, and Steven is demanding the money guaranteed by the bond to find Annie. The money was secured by a mortgage on Evelyn's grandmother's house, and the True Blue Bonds Bail Agency wants to take possession of the house.
Finding a kidnapped child is not an assignment for a bounty hunter. But Evelyn's grandmother lives next door to Stephanie's parents, and Stephanie's mother and grandmother are not about to see their neighbor lose her house because of the abduction.
Even though Stephanie's plate is full with miscreants who missed their court dates, including old nemesis and violent drunk Andy Bender and an elusive little old lady accused of grand theft auto, she can't disappoint Grandma Mazuri. So she follows the trail left by Annie and Evelyn - and finds a lot more than she bargained for. Steven is somehow linked with a very scary Eddie Abruzzi. Trenton cop and on-again, off-again fiance Joe Morelli and Stephanie's mentor and tormentor, Ranger, warn Stephanie about Abruzzi, but it's Abruzzi's eyes and mannerisms that frighten Stephanie most. Stephanie needs Ranger's savvy and expertise, and she's willing to accept his help to find Annie even though it might mean getting too involved with Ranger.
Stephanie, Ranger, Lula (who's not going to miss riding with Ranger) and Evelyn's lawyer/laundromat manager set out to find Annie. The search turns out to be a race among Stephanie's posse, the True Blue Bonds' agent, a Rangerette known as Jeanne Ellen Burrows, and the Abruzzi crew. Not to mention the fact that there's a killer rabbit on the loose.

Baker
& Taylor
When Stephanie Plum is hired to find a missing child, she begins to wonder if she is working on the right side of the law when events turn suspicious, and in the wake of a rocky relationship with Morelli, Ranger finds an opportunity to act on his feelings. 500,000 first printing.

BOTTOM-LINE:
Not bad, but not the best
.
PLOT OR PREMISE:
Hard Eight (St. Martin's Press, 2010, ISBN/ASIN: B0017I1IZA, Plum (8)) is the eighth book in the Stephanie Plum series. In this one, she's looking for a missing mom and daughter whose grandmother could lose her house if the custody bond is violated.
.
WHAT I LIKED:
The story has the typical range of secondary characters, and an addition of a hard-core female bounty hunter along the lines of Ranger. And a hysterical attempted vehicular murder of the Easter Bunny.
.
WHAT I DIDN'T LIKE:
I don't much care for stories that involve moms/wives and children in jeopardy and being shuttled around like a tub of household effects in a move. Part of that is the ick factor, but part of it is the simplistic storyline and emotional range that is usually given to the characters -- the new "damsel in distress" plotline where someone has to come rescue them. I also didn't feel the intitial bad guys were fleshed out very well, particularly as they are easy to spot in fake masks and outfits, and the final boss felt like a comic book character.
.
DISCLOSURE:
I received no compensation, not even a free copy, in exchange for this review. I am not personal friends with the author, nor do I follow her on social media.

This is a fun, suspenseful, adventure thriller with colorful characters, interesting twists, and thrills. It's nice to read these novels every once in a while, it's like catching up with old friends, however, the dialogue is awful. As much as I enjoy these, I can only read them about once a year. Janet Evanovich's dialogue is wildly amateurish. Do people really always use the term 'bad guys'?

Stephanie has done it again - involved the family in her bounty hunter activites! FUN FUN FUN

You can't miss with the Stephanie Plum series for fun and laugh out loud moments. Although these are crime/mystery novels there is enough of the rediculous that I enjoy them even though there is always a decent dose of mayhem.

Evanovich writes humorous books, and this is one of her better ones. She has the same characters and same basic plot of a bounty hunter looking for people, yet she still keeps the plot funny. My complaint is that destruction of a car isn't funny the first time, yet it's repeated more than once.

This one has the answer to Ranger.