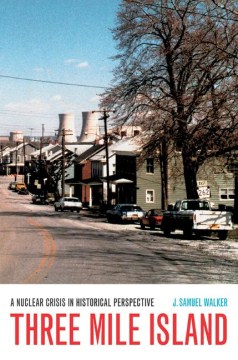 A Nuclear Crisis in Historical Perspective

Baker & Taylor
Misconceptions about the Three Mile Island crisis are cleared up in a study that reveals the causes, contexts, and consequences of the worst accident in the history of nuclear power in the United States.

University of California Press
Twenty-five years ago, Hollywood released The China Syndrome, featuring Jane Fonda and Michael Douglas as a TVnews crew who witness what appears to be a serious accident at a nuclear power plant. In a spectacular coincidence, on March 28, 1979, less than two weeks after the movie came out, the worst accident in the history of commercial nuclear power in the United States occurred at Three Mile Island. For five days, the citizens of central Pennsylvania and the entire world, amid growing alarm, followed the efforts of authorities to prevent the crippled plant from spewing dangerous quantities of radiation into the environment. This book is the first comprehensive account of the causes, context, and consequences of the Three Mile Island crisis. In gripping prose, J. Samuel Walker captures the high human drama surrounding the accident, sets it in the context of the heated debate over nuclear power in the seventies, and analyzes the social, technical, and political issues it raised. His superb account of those frightening and confusing days will clear up misconceptions held to this day about Three Mile Island.

The heart of Walker's suspenseful narrative is a moment-by-moment account of the accident itself, in which he brings to life the players who dealt with the emergency: the Nuclear Regulatory Commission, the state of Pennsylvania, the White House, and a cast of scientists and reporters. He also looks at the aftermath of the accident on the surrounding area, including studies of its long-term health effects on the population, providing a fascinating window onto the politics of nuclear power and an authoritative account of a critical event in recent American history.

"A superb account of the frightening and confusing accident at Three Mile Island in the spring of 1979. Walker succeeds in providing, in suspenseful prose, the best account to date about the crisis. Drawing on the insights gained from all his work over the past twenty years, Walker puts this tale into historical context, and helps us understand the hopes and fears that surrounded atomic energy, and shows how they affected responses to the accident. Prior accounts pale in comparison to this work."--Allan M. Winkler, author of Life Under a Cloud: American Anxiety about the Atom

"This book covers a celebrated techno-political event with authority and dispassion, capturing a sense of the human frailty and heroism that proved both tragic and comic. Walker is that rare historian who exemplifies fairness and balance in a readable style. Three Mile Island details necessary background before establishing a strong narrative, weaving the participants in a drama that many of us shared but none fully understood--until now."--William Lanouette, author of Genius in the Shadows: A Biography of Leo Szilard, the Man Behind the Bomb

Try searching for Three Mile Island to see if BPL owns related versions of the work.