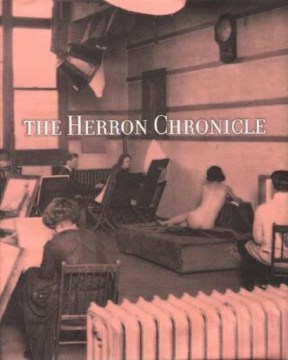 Ingram Publishing Services
The Herron Chronicle traces the history of the Herron School of Art at Indiana University--Purdue University Indianapolis, celebrating its centennial year in 2002-2003. Founded as a private school and fine arts collection in 1902, the Herron School today is a vital part of Indiana University, offering bachelor's and master's degrees in fine arts, visual communication, art education, and art history. In 1967, Herron's museum component became the Indianapolis Museum of Art. Three essays covering important events in the school's history are accompanied by 70 color reproductions of works of art and 60 black-and-white historical photos. The Herron Chronicle provides an engaging account of the development of the arts community in Indianapolis during the 20th century. Traces the institutional history of fine arts in Indianapolis from the founding of the Herron School of Art in 1902 to the present.

Blackwell North Amer
The Herron Chronicle presents the first comprehensive, illustrated record of the 100-year history of the Herron School of Art in Indianapolis. Through its doors at 16th and Pennsylvania streets have come thousands of students and faculty whose names fill the final 48 pages of this 300-page volume. Through this list runs an unbroken and shining thread of the most familiar names of Indiana's painters, sculptors, graphic artists and teachers who created the cultural fabric of Indiana in the 20th century. Remarkable among them are Clifton Wheeler, Harry Davis, Robert Weaver, Garo Antreasian, Robert Berkshire, and many others who spent both their student and professional lives at Herron.
Woven together from long-overlooked archives, unpublished manuscripts and personal recollections, illustrated with over 200 historic photographs and rediscovered paintings, The Herron Chronicle spins a compelling, year-by-year tale. It opens in 1883 with the founding of the Art Association, which established Indiana's first art museum and professional art school in 1902. Known as the John Herron Art Institute in honor of an unexpected benefactor, the combined institution was housed lock, stock and barrel in the converted Talbott mansion on what was then the northern edge of Indianapolis. The Chronicle follows the fortunes of the privately supported institute as the city grew up and changed around it.
From Herron's first meager collection and small faculty including J. Ottis Adams, Otto Stark and William Forsyth of the famed Hoosier Group, it endured two world wars and near bankruptcy during the Depression, then rose to national prominence only to split apart in 1967 into the Herron School of Art (under the aegis of Indiana University) and the Indianapolis Museum of Art. This chronicle closes fittingly in 2002, the year that ends a century-long epoch as Herron prepares to leave the only address it has ever known for the campus of Indiana University-Purdue University, Indianapolis, committed to preserve its first 100 years of tradition as it embarks on its second.
Illuminating the revolutionary era in American art that began with the broken brush stroke of Impressionism and ended with the pixel of digital imagery, The Herron Chronicle looks back along Herron's extended line. The book itself is a reflection of the extended Herron family by whom it was conceived, supported, compiled, written, photographed, and designed.

Try searching for The Herron Chronicle to see if BPL owns related versions of the work.