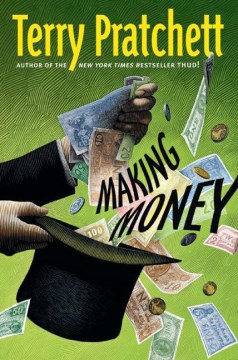 After saving the Ankh Morpork Post Office (in *Going Postal*), former criminal Moist Lipwig is appointed/threatened to the position Director of the Government Mint, where every coin costs more to make than it is worth. He also has to take over the leadership of the Royal Bank, which has been run by the same mendacious family (the Lavishes) for generations but is now in the charge of the clever widow of the late Chairman. When she dies, Moist discovers that 51 shares of the bank have been left to Mr. Fusspot, her dog. And Moist is in charge of the dog. The rest of the Lavishes are most unhappy, perhaps homicidally so.

Another hilarious, satirical novel from Pratchett, who pretended to write “fantasy” but who really wrote some of the most pointed satire in the English language. While you are laughing, you can learn a lot about economics and the people who pretend to understand it.

I think I love the series concerning Moist Von Lipwig the most, out of all the Discworld books I've read so far. Lord Ventinari makes Moist an offer he can't refuse: rebuild the Mint and Royal Bank of Ankh-Morpork or else. Moist, as usual, finds inventive ways to fix the broken and keep himself alive at the same time.

Enjoyable, with all the verbal cleverness of the best of Pratchett, but not as good as Going Postal.

Second of Pratchett's Moist von Lipwig books. the central character remains endearing, but on the whole this book didn't have the delightful edge of "Going Postal"

Still, a less than wonderful Disworld book is still usually pretty entertaining, and this is no exception. And there were some very funny moments.

This was my first visit to Discworld and its unusual inhabitants, such as a golem and an igor. Pratchett tells the story of a con man promoted to mint director, using his wiles to introduce paper money. He has an amusing style, enjoying play on words. The CEO is a dog, Mr. Fusspot, who had never seen a real bone before. Pratchett wrote: "He circled it carefully, waiting for it to squeak."

Once again, the conman with the heart and suit of takes over and saves the day-- except this time, it's a bank of Ankh-Morpork. It's fun to revisit the characters Moist, Dearheart, and Vetinari except this time, the villain is not very interesting and it's mostly a retread of "Going Postal."

What better person to run a mint that a con man? A most enjoyable read like all the Discworld novels.

Making Money features the usual, revolving cast of absurd characters and witty observations of our society. Postmaster General Moist von Lipwig, is forced to take responsibility for the Royal Bank of Ankh-Morpork, when Topsy Lavish, widow of the former Director, dies. She has left the controlling block of shares to Mr. Fusspot, her small dog, and appointed von Lipwig as the dog's guardian. As running the Post Office was getting predictable, Moist thinks he might enjoy the challenge and decides to introduce paper money. Except the rest of the Lavish family want their bank back and all the gold has disappeared from the vault.
Sir Terry Pratchett's absurd fantasy world has been described as combining the best of JRR Tolkien and PG Wodehouse.

"Why are you always in such a hurry, Mr. Lipwig?"
"Because people don't like change. But make the change happen fast enough and you go from one type of normal to another."