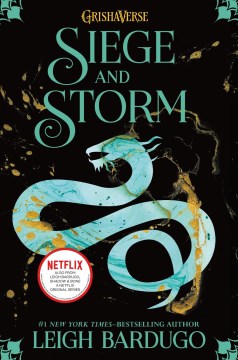 Hunted across the True Sea and haunted by the lives she took on the Fold, Alina must try to make a life with Mal in an unfamiliar land, all while keeping her identity as the Sun Summoner a secret.
Publisher: New York : Henry Holt and Company, c2013
Edition: First edition
ISBN: 9780805094602
0805094601

Another excellent installment for this series. Equally as good as the first book.

This series has blown me away. I was completely surprised by the type of world that was built. It was not something that I have encountered before. It was action packed and I cared for the characters.

The book was so slow, and nothing seemed to happen for most of it. While this was an informative middle chapter to the trilogy, I can't help but be slightly disappointed that there just wasn't more. I found myself really excited in the final chapters with the sudden blaze of action but couldn't help feeling like Bardugo saved all the fun stuff for the end to make sure no one gave up on the series mid way. I needed more Darkling, I needed more Nikolai, I needed more action, but the only thing I got more of was Mal and Alina being awkward. There were some nice little twists that kept me from putting this down, and the ending was fantastic, so I'm still excited to keep moving on. Rating – 3/5.
@Average_Bookworm of the Teen Review Board of the Hamilton Public Library

As a huge fan of book 1, "Siege and Storm" was kind of underwhelming. While I overall enjoyed the book, it was much slower with less of the adventure, romance, and magic I loved from the first book. I found the ending anti-climactic but I get why it happens as it does set the stage for book 3. Still a must read for the Grisha-verse fans out there though, and this does not stop me from wanting to read book 3 (Ruin and Rising)!

Note: This is book 2 in a trilogy. You definitely need to have read book 1 (Shadow and Bone) in order to appreciate this novel.

Bardugo was really hitting her stride here. There are so many things going on and Bardugo juggles them beautifully, in part by keeping the narration a simple first-person narrative from the perspective of Alina.

Alina and Mal try to escape the Darkling but it quickly becomes evident that he's not that easy to lose. Besides the battle to save Ravka from the Darkling, Alina is faced with battling a darkness she feels growing within her. Is the Darkling right when he says that they are two sides of a unique coin and no one else will ever understand her? Is she destined to wear the mantel of queen, saint or martyr? And can Mal's and her love survive her changing identity, and his loss of identity? So, yeah, that's a lot going on, but the pacing is superb and the writing perfection. No big pieces of exposition and what could have been a quickly contrived escape turns out to be a major plot point. Even with all these questions posed (like any good middle arc story), there's plenty of action and adventure along the way.

Note: this will not work well without reading the first book in the series.

Good follow-up to Shadow and Bone. The plot moves fairly quickly, and it's an enjoyable read.

***Spoilers ahead, you have been warned***

You’d have to read Shadow and Bone to read and understand Siege and Storm. Otherwise you’d be pretty lost as events follow up right after the first book.

The first half of the book was at a great pace and filled with lots of action, bombs, explosions, fighting, magic, all sorts of goodness you would expect for the second book to follow up for an excellent start in the first. It slows down in the second half of the book where preparations for encountering The Darkling are made and you have this whole drama with Alina and Mal going on;

I saw the chemistry with Alina and Mal in the first one, and it just falls apart here in Siege and Storm - understandably so as the dynamics have changed a lot and Alina has climbed up in the ladder of importance and Mal has suddenly fallen off the grid and is just considered a lowly guard of Alina the Sun Summoner. Which is pretty good right? You’re near the person you love and care about, you’re standing guard and you’re close by.

No. Can’t be that easy right? First Nikolai steps into the picture and is suddenly looking like a much better prospect and the drama with Alina looking for the Firebird to amplify her powers even more - the point where she becomes obsessed with it changes her personality and makes her more darker, assertive, and she’s not the girl we all once knew in the first book. I really love this personality change in her. There’s a slight whiny voice to it but she really steps up and grows exponentially as a character.

So I can see the romance aspect of the book falling apart, but at the same time you ask yourself is it really necessary? I can see the attempt at a love triangle with Mal and Nikolai with Alina in the middle but from what I see, she gets along fine with both of them, but does she really need one or the other as a love interest? I don’t see the chemistry there with either of them.

Sure, Alina still cares a lot for Mal but everything’s changed and it just seems like she doesn’t need romance..not yet anyway. Instead, the attempt at the romance is seen as two whiny people who can’t get their own way and they take it out on each other by indulging themselves on the road to self destruction. Again, that’s a very human trait and good on portraying that. The whininess though, I could do without. It caused unnecessary drama in the book, and endless of pages in the second half where the plot doesn’t seem to be moving forward or anywhere. It feels like an unnecessary filler.

The last third of the novel though did pick up the pace (did not make up for the whiny drama though) and provided a lot of the explosions and action you had in the first half. Not really featuring a cliffhanger ending, but it’s making me look forward to what I have to see in the third and final book of this series.

PS: My heart bled for Genya.

Fans of "Shadow and Bone" will certainly want to read this title, the second in the series. Alina's secret life as the Sun Summoner becomes public, while her determination to fight the Darkling forces her to make increasingly difficult decisions. Readers may share some of Alina's frustrations with the political in-fighting, but the ending is action-packed, pulling the many character and story threads together. The final volume is out, and most readers will want to continue following Alina's and Mal's adventures.

Not as good as the first book but still a good read. just slower paced.

“The less you say, the more weight your words will carry.”

“Weakness is a guise. Wear it when they need to know you're human, but never when you feel it.”

“The ox feels the yoke, but does the bird feel the weight of its wings?”

“So many men had tried to make her a queen. Now she understood that she was meant for something more. The Darkling had told her he was destined to rule. He had claimed his throne, and a part of her too. He was welcome to it. For the living and the dead, she would make herself a reckoning. She would rise.”

"No, Alina. You came here Ravka. For the Firebird. To lead the Second Army." He tapped the sun overhis heart. "I came here for you. You're my flag. You're my nation. But that doesn't seem to matter anymore." - Mal

"My mother was an oyster," he said with a wink. "And I'm the pearl." - Sturmhond

"I'm a prince," said Nikolai. "Being useful isn't part of the job description."

Nikolai plucked an invisible piece of dust from his sleeve.

"Yes, he said. "They just do it in better clothes."

"Nikolai," he corrected. "But I've also been known to answer to 'sweetheart' or 'handsome.' " - Nikolai Lantsov

"Then you and I will have something in common, won't we? Besides, I like to have powerful enemies. Makes me feel important." - Sturmhond

Nymeria23 thinks this title is suitable for 12 years and over

whitefalcon17 thinks this title is suitable for 14 years and over

rima_gabrielle thinks this title is suitable for 13 years and over

Hunted across the True Sea, haunted by the lives she took on the Fold, Alina must try to make a life with Mal in an unfamiliar land. She finds starting new is not easy while keeping her identity as the Sun Summoner a secret. She can’t outrun her past or her destiny for long.

The Darkling has emerged from the Shadow Fold with a terrifying new power and a dangerous plan that will test the very boundaries of the natural world. With the help of a notorious privateer, Alina returns to the country she abandoned, determined to fight the forces gathering against Ravka. But as her power grows, Alina slips deeper into the Darkling’s game of forbidden magic, and farther away from Mal. Somehow, she will have to choose between her country, her power, and the love she always thought would guide her--or risk losing everything to the oncoming storm.