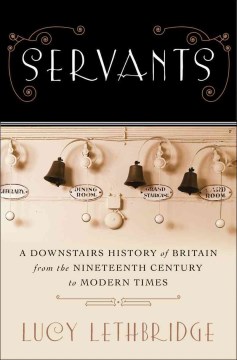 WW Norton
Literary ReviewAt the fore are the experiences of young girls who slept in damp corners of basements, kitchen maids who were required to stir eggs until the yolks were perfectly centered, and cleaners who had to scrub floors on their hands and knees despite the wide availability of vacuum cleaners. We also meet a lord who solved his inability to open a window by throwing a brick through it and Winston Churchill’s butler who did not think Churchill would know how to dress on his own.Servants
The vividly told lives of British servants and the upper crust they served.

Baker & Taylor
Paints a vivid picture of the lives of British servants through the letters and diaries of those who served in upper crust households and explores the complicated relationships and social implications between the server and those they served. 20,000 first printing.

Book News
Offering a wealth of b&w historical photos, a writing style that will appeal to general readers, and enough depth and detail to interest scholars, this work charts the changing roles of domestic servants in wealthiest households as well as middle class households in Britain, describing examples of oppression and maltreatment as well as examples of friendship and loyalty between servants and employers. Excerpts from letters and diaries reveal the voices of household servants, male and female; the author also draws on original interviews with former and current households servants. Annotation ©2014 Book News, Inc., Portland, OR (booknews.com)

Baker
& Taylor
Depicts the lives of British servants through the letters and diaries of those who served in upper class households and explores the complicated relationships and social implications between the server and those they served.

Very interesting social history about a topic that's not often studied. The author traces the evolution of the domestic servant, the British household and the changing times from the 1800s to present day, with most of the focus on the period from 1900-1950.

Lucy Lethbridge’s _Servants: A Downstairs History of Britain from the Nineteenth Century to Modern Times_ is the best comprehensive history I have seen on the topic of domestic labour in Great Britain.

Using a methodology that resembles that of my favorite historian, David Kynaston (see _Austerity Britain: 1944-1951_ for example), Lethbridge did a copious amount of primary research, relying on diaries, correspondence, newspaper columns, and interviews with former servants and employers to tell the complicated story of life below stairs. Lethbridge also brings in fictional accounts, as well as devoting time in her final chapter to the popular 1970s ITV series, _Upstairs, Downstairs_.

Lethbridge does a superb job of documenting her sources, using both endnotes and a bibliography that will guide scholars and interested readers who wish to pursue this topic further.

What I most appreciate about this study is Lethbridge’s determination to update the story of domestic labour by moving past the Victorian and Edwardian era (where the bulk of scholarship on the topic exists) and instead detailing the decline of the occupation after World War Two. In doing so, she has answered many of my own questions about the status of domestic service in Great Britain today, going so far as to discuss the domestic recruitment agencies, such as Greycoat Lumleys and Norland Agency for nannies. Who employs a full battery of domestic servants after World War II up to today? Lethbridge has done extensive research to answer this question and also to determine how the relationships between employers and servants have changed and why. She even goes into the semantics, how terms such as “servant” and “master” have changed to accommodate (or not) changing sensibilities towards domestic labour; namely, the shift to “candidate” and “client”, to use Greycoat Lumley’s terminology.

Portions of Lethbridge’s study reminded me of a 2000 Wall to Wall/PBS production, _1900 House_, where a modern-day family goes back to 1900 and becomes for all intents and purposes a lower-middle-class Victorian family. On their budget they can afford one maid-of-all work. Although the maid does take a load off of Joyce’s shoulders (she is the mistress of the home), early into the maid’s employment, Joyce realizes that it is only because of her maid that she herself is free to think, create, rest, or become an activist—whatever she chooses to do. Her guilt about her station and that of her maid’s results in Joyce firing the maid. I remember being intrigued by Joyce’s keen sensitivity to what “domestic service” meant. I remember being intrigued by Joyce's keen sensitivity as to what "domestic service" meant, and also how her decision to fire the maid left the maid out of work and, had it been the Victorian era, possibly on the verge of destitution. Lethbridge introduces this topic as well. She writes about Ethel Mannin, a 1920s-era feminist and socialist who hired domestic help in order to free her for her life’s work. Lethbridge writes that Mannin’s “socialist principles were apparently untroubled by the maid. . . . As Mannin saw it, domestic help was a necessary component of her freedom. ‘It was snobbish; it was class distinction; it was exploitation but it worked,’” Mannin wrote fifty years later (Lethbridge, p. 165).

It is Lethbridge’s attention to these complex themes that draw me to it. Although dense with information, Lethbridge writes in a straight-forward style, using little jargon and “telling a story that is true”, my favorite definition of what history is. I highly recommend this book and am grateful that Lethbridge cared so much about the topic to do a lot of original research and investigation in order to share her findings with readers.