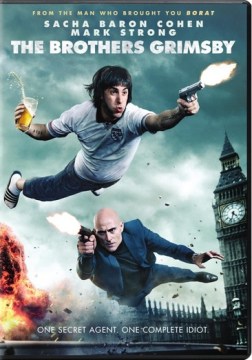 I'm not sure what I was expecting, as I'm not big on rude, stupid, crude, insulting humor as entertainment, but every once in a while I'll find one of those movies that is exactly that, and that just happens to hit my funny bone in an irreverent, enjoyable way---sort of a guilty pleasure---but unfortunately this was not one of those movies. Not even sure how much of it I watched, but after the ten or fifteen minutes of it that I might have watched I simply couldn't take any more, just a plain waste of time, with each succeeding scene even more insulting to my intelligence and fairly lenient sense of morals than the last, and to be honest I'm not even sure why I'm giving it one and a half stars...seriously.

Good inappropriate humor. The elephant sex scene is the best.

I couldnt finish the movie. It was disgusting and sick. Not my type of humour at all.

A little outrageous and crazy, but there were some funny moments.

Outrageous and over the top. Mostly silly, stupid and gross. Rated R for good reason.

Cohen has done one or two films with humour in the past, so I picked this one up. What a disaster. Filled with gross-you-out moments and vulgarity, I just couldn't finish it. I am just glad I did not pay for a cinema ticket to see it. Horrible!

This is so typically Sacha Baron Cohen that I'd have been surprised if there WASN'T a shot of men's genitalia dangling in someone's face. The movie would probably have annoyed me if it wasn't for Mark Strong whose very presence added a balance to the raunchiness. A real straight man act set against the chaos of Cohen's antics. Overall pretty funny and well done. And not a bad backstory to anchor it.

I rather enjoyed this movie I was laughing the whole way through I like a movie you cannot predict whats coming next and this one delivers that some of the stuff they did was hmm well questionable I will not add spoilers but yeah they could have had a better ending.

Sacha Baron Cohen should say it all. In a nutshell. Pushing the envelope. I thought it was a nice departure from his typecast villains, seeing Mark Strong in a comedic role for a change.

Juvenile. Rude. Typical Sacha Baron Cohen and absolutely hilarious!!! If you're into his films you'll love this. If you're easily offended don't bother watching.

gracieclover thinks this title is suitable for 18 years and over

Videoprone thinks this title is suitable for 19 years and over

rem85 thinks this title is suitable for 18 years and over

Sebastian Graves: Trust you? Trust you? Because of you, the head of the World Health Organisation is dead and Harry Potter has AIDS. You managed to do in three seconds what Voldemort failed to do in eight movies!

A few less offensive:
We have seven billion people running around on a planet... that can only hold five. I'm just trying to make the world a better place, that's all. By deleting the surplus. "Cure the world."
-And whom, exactly, do you intend to "delete"?
The garbage. The imbeciles who lie around drunk, reproducing like rabbits. And sitting there with their hand out, expecting the rest of us to pay. And let's be frank, who's gonna miss them anyway?
===
So we're scum, are we? Well, let me tell you something about scum: It's scum who built the hospitals
that are now closing down. ... It's scum who die in the wars started by the bastards in charge. ... It's scum that keep the Fast and Furious franchise alive. ... So I ask you to join with us now... and storm that pitch ... and show the world that scum cannot be washed away, ever.
===
Time to say goodbye to your... hideous pig wife.
-Let me give you some advice, Ukrainian Ben Affleck. Never ever slag off a Grimsby lass.

How do you know if England... are gonna be in the final?
-They'd better be because I just got this done. England, World "Champions," 2016.
That says 200016.
-No, it says 2000 and 16.
That's 198,000 years from now.
-In that case, I got two zeroes for free, so who's the idiot?
===
Why are you so out of breath?
- I've run all the way from home.
But you only live across the street.
===
But if you can't trust family, who can you trust?
-Trust you? Trust you? Because of you, the head of the World Health Organisation is dead and Harry Potter has AIDS. You managed to do in three seconds what Voldemort failed to do in eight movies!
===
Ooh, I'm getting stiffer than a pedophile at Legoland.
===
Nobby, meet the head of the biggest crime syndicate in the world.
- What, she runs FIFA?

Loading...
BPL owns a similar edition of this title.