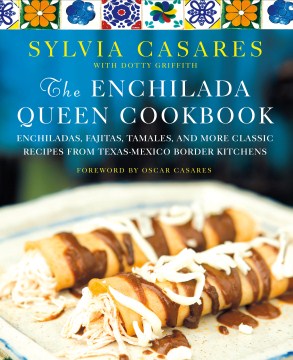 McMillan Palgrave
Simple, flavor-changing tricks and 80 recipes for enchiladas, fajitas and classic side dishes for the home cook, by Silvia Casares, founder and chef of Texas' favorite Sylvia's Enchilada Kitchen.

Better than going out for Mexican food!

Mexican food—by which most of us mean Tex-Mex—is a favorite from Los Angeles to New York and everywhere in between. And the heart of great Tex-Mex cooking comes from home kitchens along the Rio Grande. In THE ENCHILADA QUEEN COOKBOOK, Sylvia Casares gives you the best of the best, including tricks and simple techniques to turn any dish from appetizing to amazing. You’ll learn how to make her Holy Trinity spice paste; why you should use certain key shortcuts, such as chicken bouillon, in some dishes; and how to do her tortilla-changing Texas Two-Step marinating technique. And after you’ve picked your favorites from her 14 key sauces, you’ll make unbelievable food for a family or a crowd, including:

And the Enchilada Queen is an expert in more than just enchiladas. Here you’ll find appetizers, sides, breakfasts and desserts, such as:

The Perfect Margarita’s here too, and so much more. In The Enchilada Queen Cookbook, you’ll get kitchen wisdom from a lifetime of learning recipes from madres and abuelas who make food specific to their border towns on the Rio Grande. You’ll also get a resource for hundreds of family dinners—and a party between covers!

Try searching for The Enchilada Queen Cookbook to see if BPL owns related versions of the work.