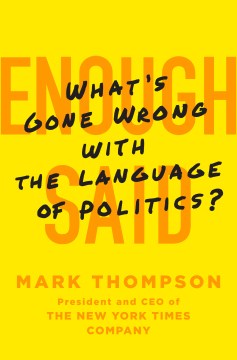 What's Gone Wrong With the Language of Politics?

Baker & Taylor
The President and CEO of The New York Times examines free speech, political rhetoric and the distortion of our common language.

There’s a crisis of trust in politics across the western world. Public anger is rising and faith in conventional political leaders and parties is falling. Anti-politics, and the anti-politicians, have arrived. In Enough Said, President and CEO of The New York Times Company Mark Thompson argues that one of the most significant causes of the crisis is the way our public language has changed.

Enough Said tells the story of how we got from the language of FDR and Churchill to that of Donald Trump. It forensically examines the public language we’ve been left with: compressed, immediate, sometimes brilliantly impactful, but robbed of most of its explanatory power. It studies the rhetoric of western leaders from Reagan and Thatcher to Berlesconi, Blair, and today’s political elites on both sides of the Atlantic. And it charts how a changing public language has interacted with real world events – Iraq, the financial crash, the UK's surprising Brexit from the EU, immigration – and led to a mutual breakdown of trust between politicians and journalists, to leave ordinary citizens suspicious, bitter, and increasingly unwilling to believe anybody.

Drawing from classical as well as contemporary examples and ranging across politics, business, science, technology, and the arts, Enough Said is a smart and shrewd look at the erosion of language by an author uniquely placed to measure its consequences.

Baker
& Taylor
The President and CEO of "The New York Times" examines free speech, political rhetoric, and the distortion of common language.
"'Free speech' always has been limited by obstacles: national, state, or local laws, organizational rules, social restrictions, incomplete transmission via technology, and the limits of language itself. Now, with the advent of social media platforms such as Twitter, Facebook, Google Plus, and YouTube, a new era has emerged, and free speech has exploded. Never before have we enjoyed such free and diverse access to information, or more freedom to debate issues. But with such openness of language and opinion, we still have a generally poor understanding of the most important issues that we face today. Why? In Enough Said, New York Times CEO Mark Thompson argues that there is a widening gap between political power and the public, because public languageis being misused or misunderstood. Drawing from classical rhetoric as well as contemporary political doublespeak, Thompson outlines the dangers of speech without accountability, while identifying positive trends in modern speech and exploring our new age of public engagement. "--

Try searching for Enough Said to see if BPL owns related versions of the work.