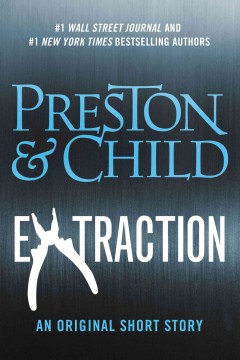 From #1 New York Times bestselling authors Preston & Child, an all-new short story featuring Agent Pendergast, available only as an ebook and audio download. In New Orleans' French Quarter, the Tooth Fairy isn't a benevolent sprite who slips money under your pillow at night....he's a mysterious old recluse who must be appeased with teeth—lest he extract retribution. When young Diogenes Pendergast loses a tooth, however, his skeptical older brother Aloysius is determined to put the legend to the test...with dire consequences. *Includes a special preview chapter of Preston & Child's new full-length novel TWO GRAVES, available December 11, 2012.
Publisher: 2012
ISBN: 9781455529360
Characteristics: 1 online resource

The third occupant of the room was not seated, but instead paced irritably up and down. He was a strange, comical figure: small of stature, dressed in a swallowtail coat, with all manner of odd charms and relics dangling from his neck on silver chains, which clanked and jingled with his movements. As he walked, he supported himself upon a cudgel-like cane whose handle was carved into the semblance of a grinning skull. Now and then his stomach could be heard to growl in empty complaint. This was Monsieur Bertin, Pendergast’s old childhood tutor in natural history, zoology, and more outré subjects. He was currently in New York City, visiting his old protégé.

“Dufour… A French name, ‘of the oven.’ I believe that would be the equivalent of Baker in English.”
===
Here I am, a guest in your house—starved like a prisoner in the Bastille. After tonight, my digestion will never be the same.
===
“It was one of those old mansions built in the Creole style, but with a mansard roof and oriel windows. It was a fright, with most of the windows broken, the roof slates loose, the porch about to fall off, and the front garden overgrown with dying palmettos.”
===
French Quarter, which—despite being at the center of a large city—was still highly insular and provincial. French remained the language of the old families, and many people didn’t even consider themselves American. In many ways it was cut off from the outside world, where Creole superstitions and strange beliefs—many of them very old—were allowed to flourish and spread… and suppurate.”

“He believes in, and practices, obeah, rootwork, and voodoo.”
===
You see the odd things he wears around his neck? Those are not eccentric decorations; they are amulets, gris-gris and charms to ward off evil, attract money, and, above all, help him maintain sexual potency in his declining years.”
===
“At the time my story takes place, I had just turned nine. Naturally I thought the legend of the tooth fairy—Dufour or otherwise—to be pure rubbish. I looked on those who believed with disdain, even contempt.
===
But he was worried sick and especially frightened of our father, who was an irascible and even violent man and who, on his return, would blame him for losing his son and might thrash him.

“And the, ah, leaving of teeth at the Dufour house? Has the tooth fairy tradition continued?”

“You know how children are, my dear Constance. Childish rituals do not die; they are passed along more tenaciously than any adult tradition. The tradition continued even as the Dufour house fell further into rack and ruin. And then, one dark night, it burned down. That was about three years after the events I’ve described. No one was particularly surprised by it; abandoned houses did have a tendency to burn. But I, for one, long wondered if my brother Diogenes was somehow responsible. Later, it came to my attention that he enjoyed fires very much; the larger the better.”

Depending on the setup and font size etc., likely only about 25 pages in physical book form and thus a fast read about the urban fiend known as Tooth Fairy when Agent Aloysius Pendergast and his younger brother Diogenes were children growing up in New Orleans. The story tells an events that would foster the extreme fraternal loathing between them ever since.