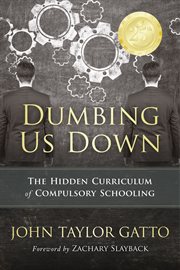 The Hidden Curriculum of Compulsory Schooling

John Taylor Gatto's radical treatise on public education, a New Society Publishers bestseller for 25 years, continues to advocate for the unshackling of children and learning from formal schooling. Now, in an ever-more-rapidly changing world with an explosion of alternative routes to learning, it's poised to continue to shake the world of institutional education for many more years.
Publisher: [United States]: New Society Publishers, 2017
ISBN: 9781771422444
1771422440

I need to re-read this book, after several years I wonder how much I agree/disagree with it now...

Focus is entirely on compulsory education IN THE UNITED STATES, not public education is general. Gatto's opines that the decline of the US is due equally to compulsory education and television, with some blame for parents working outside the home. Reads as a series of rants, with few concrete solutions.

If you have *ever* sensed that something about our educational system just wasn't working, you MUST read Gatto--this book as well as his others. Though I do not agree with everything he says, the truth he reveals is essential for those of us longing to raise intelligent, balanced, whole children.

I copied this information from the internet:

John Taylor Gatto was born in Monongahela, Pennsylvania, a river town thirty-five miles southeast of Pittsburgh where his grandfather, Harry Taylor Zimmer, was the town printer in the days when printers still honored their descent from Peter Zenger. John attended public schools in Swissvale, Monongahela, and Uniontown, and the private Catholic boarding school in Latrobe, all towns in western Pennsylvania.

As a boy he held many jobs: sweeper in his grandad's printing office, snow shoveler, lawn mower, Kool-Ade and comic book salesman, and delivery boy for the Pittsburgh Sun-Telegraph and Uniontown Morning Herald, among others. He did undergraduate work at Cornell, the University of Pittsburgh, and Columbia, then served in the U.S. Army medical corps at Fort Knox, Kentucky, and Fort Sam Houston, Texas. Following army service he did graduate work at the City University of New York, Hunter College, Yeshiva, the University of California, and Cornell.

After college, Mr. Gatto worked as a scriptwriter in the film business, was an advertising writer, a taxi driver, a jewelry designer, an ASCAP songwriter, and a hotdog vendor before becoming a schoolteacher. During his schoolteaching years he also entered the caviar trade, conducted an antique business, operated a rare book search service, and founded Lava Mt. Records, a documentary record producer, which won several awards for cover design and content, and which presented the horror of H.P. Lovecraft, dramatized, and the speeches of Richard M. Nixon and Spiro Agnew, exactly as given.

He climaxed his teaching career as New York State Teacher of the Year after being named New York City Teacher of the Year on three occasions. He quit teaching on the OP ED page of the Wall Street Journal in 1991 while still New York State Teacher of the Year, claiming that he was no longer willing to hurt children. Later that year he was the subject of a show at Carnegie Hall called "An Evening With John Taylor Gatto," which launched a career of public speaking in the area of school reform, which has taken Gatto over a million and a half miles in all fifty states and seven foreign countries. In 1992, he was named Secretary of Education in the Libertarian Party Shadow Cabinet, and he has been included in Who's Who in America from 1996 on. In 1997, he was given the Alexis de Tocqueville Award for his contributions to the cause of liberty, and was named to the Board of Advisors of the National TV-Turnoff Week.

His books include: Dumbing Us Down: The Hidden Curriculum of Compulsory Schooling (1992); The Exhausted School (1993); A Different Kind of Teacher (2000); and The Underground History Of American Education (2001) of which the special author's Pre-Publication Edition (2000) is for sale at this Web site.

Gatto's office is in New York City, his home in Oxford, New York, where he is currently at work on a documentary film about the nature of modern schooling entitled The Fourth Purpose, with his friend and former student, Roland Legiardi-Laura. For more information about this film, visit The Fourth Purpose. Gatto has been married for forty years to the same woman, and has two grown children and a cat. He hopes to build a rural retreat and library for the use of families pondering local and personal issues of school reform.

How to book John Taylor Gatto as a speaker.
Over the past nine years, John Taylor Gatto has spoken at over 750 places in fifty states and seven foreign countries....to be continued later, comments not saving properly!.......Also suggest "A Different Kind of Teacher" which is not available in the library system (why?) but I ordered a copy through the Chapters old books and I'm very glad I did!

A must read for all teenagers as well as all parents!!

if you want you kid to get education you better be there for him. we're locked on chasing some dreams and we're losing the most precious thing in our life - our family.

A must read for all teenagers as well as all parents!!

A must read for anyone with chldren in school. The author was a teacher for many years and his critiques ring true.