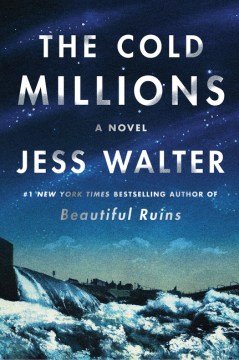 The Cold Millions : A Novel

Baker & Taylor
"Orphans Gig and Rye Dolan don't have a penny to their names. The brothers work grueling, odd jobs each day just to secure a meal, and spend nights sleeping wherever they can with other day laborers. Twenty-three-year-old Gig is a passionate union man, fighting for fair pay and calling out the corrupt employers who exploit the working class. Eager to emulate his older brother, Rye follows suit, though he can't quite muster Gig's passion for the cause. But when Rye's turn on the soap box catches the eye of well-known activist and suffragette Elizabeth Gurley, he is swept into the world of labor activism-and dirty business. With his brother's life on the line, Rye must evade the barbaric police force, maneuver his way out of the clutches of a wealthy businessman-and figure out for himself what he truly stands for. The Cold Millions is a stunning portrait of class division and familial bonds. In this masterful historical take on the enduring saga of America's economic divide, Jess Walter delivers nothing less than another "literary miracle" (NPR)"--

An intimate story of brotherhood, love, sacrifice,&#160; and betrayal set against the panoramic backdrop of an early twentieth-century America that eerily echoes our own time,&#160;The Cold Millions&#160;offers a&#160; kaleidoscopic portrait of a nation grappling with the chasm between rich and poor, between harsh realities and simple dreams.

The Dolans live by their wits, jumping freight trains and lining up for day work at crooked job agencies. While sixteen-year-old Rye yearns for a steady job and a home, his older brother, Gig, dreams of a better world, fighting alongside other union men for fair pay and decent treatment. Enter Ursula the Great, a vaudeville singer&#160;who performs with a live cougar and introduces the brothers to a far more dangerous creature: a mining&#160;magnate determined to keep his wealth and his hold on Ursula.

Dubious of Gig&;s idealism, Rye finds himself drawn to a fearless nineteen-year-old activist and feminist named Elizabeth Gurley Flynn. But a storm is coming, threatening to overwhelm them all, and Rye will be forced to decide where he stands. Is it enough to win the occasional&#160;battle, even if you cannot win the war?

Featuring an unforgettable cast of cops and tramps, suffragists and socialists, madams and murderers, The Cold Millions is a tour de force from a &;writer who has planted himself firmly&#160;in the first rank of American authors&; (Boston Globe).

Baker
& Taylor
Enduring the corruption of their union employment, two young day laborers are respectively drawn to a feminist activist and a vaudeville singer whose experiences reflect an unjust world on the brink of upheaval. 250,000 first printing.

Try searching for The Cold Millions : A Novel to see if BPL owns related versions of the work.